US unveils world’s most powerful supercomputer

US unveils world’s most powerful supercomputer 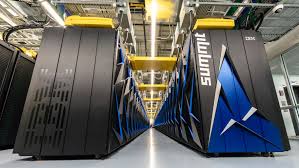 Us scientist have made a computer which can complete 2,00,000 trillion calculations per second. Making a power which has never been seen before in computers power and energy advanced materials and artificial intelligence (AI).

Summit can process 10 petabytes of memory paired with fast, high-bandwidth pathways for data movement. this combination of hybrid CPU GPU mark an amazing power in the history.

For certain scientific applications, Summit will also be capable of more than three billion mixed precision calculations per second, or 3.3 exaops.

“Summit will empower scientists to address a wide range of new challenges, accelerate discovery, spur innovation and above all, benefit the American people,” said Rick Perry, Secretary of Energy.

“Summit takes accelerated computing to the next level, with more computing power, more memory, an enormous high-performance file system and fast data paths to tie it all together. That means researchers will be able to get more accurate results faster,” said Jeff Nichols, ORNL associate laboratory director for computing and computational sciences